The Palestinian media landscape is quite diverse. The three most important Palestinian newspapers are Al-Quds (circulation 30-50,000), Al-Ayyam (circulation 20-25,000) and Al Hayat al Jadida (circulation 5,000), all of which are close to the Palestinian Authority. Hamas publishes Al-Resalah and Al-Falastin magazines and operates the Al-Aqsa television station. The official news agency is Wikalat Anbaa ‘Filastiniya (WAFA).

According to GETZIPCODES, the Ma’an News Agency has been providing independent news on the Internet since 2005. Their website is one of the most visited in Palestine. But other websites, such as those of MIFTAH or the Palestine News Network (PNN), publish independent opinions and information about Palestine.

The independent organization Freedom House rates the status of press freedom 2020 in the Gaza Strip at 11 (= unfree) and in the West Bank including East Jerusalem at 25 (= unfree) on a scale from 1 (extremely bad) to 100 (extremely good).

In 2019 the Palestinian Center for Development and Media Freedoms (MADA)678 violations of media freedom in Palestine (an increase of 16% compared to the previous year): 43.8% (ie 297 attacks) by Israelis, 29.5% (ie 200 attacks, 87 (43.5%) in the West Bank and 113 (56.5%) in the Gaza Strip) by Palestinians and 26.7% (ie 181 attacks) by social media companies. Physical attacks, arrests, interrogations, hindrance or prevention of journalistic work, the closure of media facilities and damage to equipment are to be complained about. In May 2019, Facebook closed and removed 65 pages and accounts of Palestinian journalists and authors in the “fight against incitement to violence and terrorism” without any explanation or prior warning.

In the first half of 2020, MADA recorded 237 violations of media freedom in the Palestinian territories, 125 by Israel, 64 by Facebook and 47 by Palestinian institutions in the West Bank and Gaza Strip. That is significantly less than in the first half of 2019, in which there were 330 injuries. This decrease is due to fewer violations of media freedom by Palestinian institutions, which MADA also attributes to the measures taken to contain the corona pandemic.

On March 2, 2020, journalist Ayman Qawariq from the town of Awarta in the Nablus administrative district was arrested on the basis of the Computer Crime Act for insulting public authorities. Among other things, he had criticized the Committee on Interaction of Israeli Society for normalizing the occupation.

On October 17, 2019, at the request of the Attorney General, the District Court in Ramallah ordered a revised version of the Act of 2017 to block 59 websites, blogs and Facebook pages for an initial period of six months in accordance with Article 39, Section 2 of the Computer Crime Act of April 2018. The ruling stated that the websites’ texts, photos and articles were endangering national security and internal peace, disrupting public order and inciting Palestinian public opinion. Some sides are connected to Hamas and the Islamic Jihad, some sympathize with Mohammed Dahlan, a sharp critic of Mahmoud Abbas.

March 10, 2019 Hamas security forces arrested 13 political activists in the Gaza Strip while they were planning demonstrations in a private apartment against the high cost of living in the Gaza Strip. They were ill-treated and tortured and were not released until two days later with warnings not to pursue their plans. On the afternoon of March 14, 2019, Hamas security forces attacked hundreds of peaceful protesters in the Jabaliya, Deir al-Balah and al-Boreij refugee camps and in Rafah using noise grenades, batons, pepper sprays, live ammunition and assaults. On March 15, 2019, Hamas security forces broke into the home of a local journalist, beat the two human rights activists there and confiscated their cell phones. At 16. On March 23rd, 2019, Hamas security forces arrested human rights defenders who were then working in the Al-Shujayya neighborhood of eastern Gaza City. Various journalists across the Gaza Strip were beaten, arrested and prevented from documenting the demonstrations. Many journalists, lawyers and NGO workers were summoned for interrogation after giving testimony about the behavior of the Hamas police.

On September 4, 2017, Palestinian security forces arrested Issa Amro, coordinator of the Youth Against Settlements group in Hebron, for criticizing the Palestinian Authority in comments on Facebook. On the basis of the Computer Crime Act that came into force in July 2017, he is now accused of having disrupted public order. The new law permits the arbitrary arrest of anyone who criticizes, communicates, or replies to the Palestinian Authority on the Internet. Anyone who is alleged to have disrupted public order, national unity or social peace can be sentenced by this law to up to 15 years of forced labor. Article 7 of the Act imposes prison terms and fines between $ 1,400 and $ 4,200 for “anyone who receives or intercepts data transmitted over a computer network or information technology device and who has not been expressly authorized to do so”.

At 2 a.m. on August 31, 2016, Israeli security forces stormed the entrance door to the office of the Sanabel radio station in Dura, Hebron administrative district, destroyed and confiscated large parts of the equipment, and arrested five employees. They sealed the front door and closed the station for three months, claiming the station had received funds from Hamas. 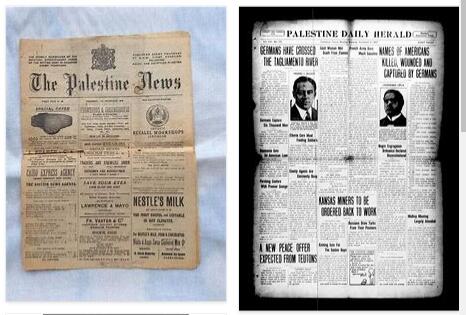