Liberia is a presidential republic based on the American model. The president is elected directly by the people for a period of six years and can run for a maximum of two terms. She / he is head of state, commander in chief of the armed forces, head of government of the executive branch and appoints the cabinet with the approval of the senate.

The legislature consists of the Senate with 30 members, who have a term of office of nine years, and a House of Representatives with 64 members, who are elected by the people for six years each. The Coalition for Democratic Change (CDC), the Liberty Party (LP), the Coalition for the Transformation of Liberia (COTOL) and the Unity Party (UP) are the largest parties.

The representatives and senators are determined by majority voting, with the 15 administrative districts (“counties”) of Liberia each sending 2 senators, while the constituencies for the House of Representatives are divided among the counties according to the number of registered voters. There is only one constituency per county in the Senate, so both the candidate with the most votes (as “Senior Senator”) and the candidate with the second most votes (as “Junior Senator”) receive a seat. While the term of office of the “Senior Senators” is nine years, the “Junior Senators” as well as the members of the House of Representatives are elected for a period of six years. In 1984 a new constitution was passed by referendum which, like the previous one, is based closely on the US model.

According to computerannals, the 15 administrative districts (“counties”) are divided into different numbers of districts depending on their size. The Liberian government appoints the chief administrators (county superintendent and district commissioner) of these subordinate units. Cities have elected mayors and city councilors. In addition to this “modern” political structure, there is traditional leadership at the various levels (Town Chief, Clan Chief and Paramount Chief), which have considerable influence, especially in rural areas. This dualism also continues in the legal system, where public and traditional jurisdiction coexist.

The presidency of Ellen Johnson-Sirleaf

Ellen Johnson-Sirleaf was the first elected female head of state in Africa. The first time she was elected as the new President of Liberia at the end of 2005 as a candidate for the Unity Party with a narrow lead over ex-soccer star George Manneh Weah (Congress for Democratic Change), the second time at the end of 2011. However, her position should not be envied. The country’s infrastructure was on the ground after the war, every tenth citizen fled, the opportunities for schooling inadequate, 80 percent of the population affected by unemployment, the crime rate high, ethnic tensions widespread, corruption immense and the country heavily in debt.

In the reconstruction of Liberia, the President relied on international expert knowledge and the commitment of many women. She has held strategic positions in government, as well as in the economics and trade ministries, with women.

Johnson-Sirleaf, the Harvard-trained banker and former director of the United Nations Development Program (UNDP), has appointed economic and financial experts, many of whom have long been in exile, to her first cabinet. Many of them have gained experience in the World Bank and other international organizations. In 2010 Liberia was canceled a large part of its debt.

The human rights situation has continuously improved across the country. But there are still serious shortcomings in the justice system: a lack of qualified staff, infrastructure problems and frequent absences from work. Corruption is still a common problem, including within the government. The population has little confidence in the police and the courts.

In 2011 Johnson-Sirleaf – contrary to its original promise – ran for a second election. The strongest contestant was Winston Tubman from the CDC with George Weah as deputy. Sirleaf received the most votes in the first ballot with 43.9%, but since she did not get an absolute majority of at least 50%, there was a runoff four weeks later, which was boycotted by Tubman, on the grounds that the results of the first ballot had been forged. National and international election observers could not confirm this. In the runoff election, there was a significantly lower turnout (38.6%, 71.6% in the first ballot); if there was no opposing candidate, Johnson-Sirleaf received 90.3% of the vote.

The president was quite controversial. She has been accused of not being tough enough in the fight against corruption and has been heavily criticized for helping her own sons to high positions, such as a board position at the national oil company. Her efforts in Liberia’s debt relief and her commitment to girls and women in Liberia have been widely recognized. Internationally she was more highly regarded than in her own country. In June 2014 she received the ‘ World Economic Prize ‘ from the Kiel Institute for the World Economy.

The award of the Nobel Peace Prize to Ellen Johnson-Sirleaf a few days before the presidential election in October, together with the Liberian peace activist Leymah Gbowee and the Yemeni human rights activist Tawakkul Karman, aroused great resentment among the opposition and was seen as electoral aid.

The award of the Ibrahim Prize for Good Governance in February 2018, after the resignation of the President, is not entirely undisputed. The award recognizes especially their achievements in the peace process and democratic institutions under construction after the Civil War. 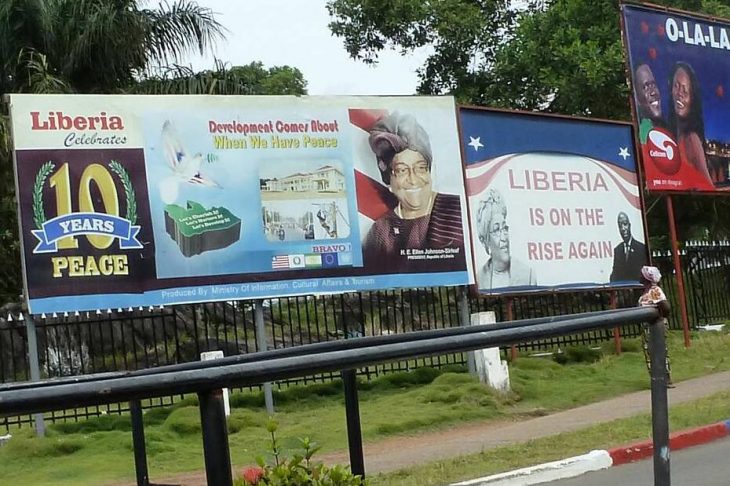