The mining sector was largely responsible for Liberian economic growth from the 1960’s until the beginning of the war. The mining of iron ore was the most important branch of the mining industry, its exports made up 60 percent of all Liberian export income and contributed 25 percent to the gross national product. Iron ore was mined by multinational companies in three regions of Liberia and transported by rail to the ports in Monrovia and Buchanan: in the so-called ” Western Cluster””(Mano River and Bomi Range) in the border region with Sierra Leone, in the Bong Range northeast of Monrovia and in the Nimba Range on the border with Guinea. In the 1970’s and 1980’s, the development of deposits in the Wologizi Range (south of Voinjama), in the Pulu Range in the southeast of the country and across the Guinean border in the Nimba Mountains.

During the civil war (1989-2003) weapons were financed with diamonds, and to a large extent diamonds from Sierra Leone were also sold for the same purpose via Liberia. According to ehealthfacts, in order to curb the conflicts in Liberia and Sierra Leone, the UN therefore imposed a diamond trade embargo on Liberia in 2001, which was lifted in 2007.

Since the end of the civil war, the Liberian government has been trying to revive the mining sector. Under the transitional government of Gyude Bryant (2003-2006), a concession for the former LAMCO ore mine near Yekepa in the Nimba Mountains was granted to the global steel group Arcelor Mittal. This concession – which includes the mine, the railway line and the port of Buchanan – was controversial in Liberia and the subject of a critical report by Global Witness. After Ellen Johnson-Sirleaf took office, the concession agreement was renegotiated. The first iron ore shipment took place in September 2011 has been taking place for about 20 years. The prerequisite for this was to rebuild the railway from Yekepa to the port of Buchanan. The successes of the Liberian economy in recent years have been based to a large extent on the extraction of natural resources. Profits were severely restricted both by the Ebola crisis (2014-16) and by falling raw material prices. Since then, prices have only recovered gradually, which has affected the economy, and thus the population, noticeably.

In 2010 the first licenses for the exploration of oil deposits off the coast of Liberia were granted. At the end of 2011, the American company Chevron began looking for oil in the offshore sector. The Liberian parliament approved an exploration contract with Chevron in September 2010. A number of companies now have licenses for oil drilling off the coast of Liberia issued by the National Oil Company of Liberia (NOCAL).

The licensing led to corruption scandals in which senior members of the government were involved, including the son of the then president, Robert Sirleaf, who was also chairman of the NOCAL board at times. In 2018, the newly elected President Weah set up a commission to investigate the bribery scandals and announced that it would put further licenses out to tender.

Much has been done in recent years to ensure that the income the state receives from raw material exports benefits Liberia’s economic development and poverty alleviation. The country endeavors to implement the standards of the international initiative to improve transparency in the extractive industries (EITI) in the management of these resources; Liberia was the first country in Africa to meet the EITI’s transparency standards. Compliance with which is of LEITI(Liberian Extractive Industries Transparency Initiative). In Liberia, this initiative also includes the management of rubber and wood resources. This measure would become even more important if oil production were to begin.

Since the lifting of the UN sanctions, diamonds have again been exported legally in Liberia. In addition to the established diamond mines in Lofa and Nimba, new deposits have been discovered in Sinoe in recent years. Since 2007 Liberia has been participating in the international diamond certification system, the Kimberley Process to curb the trade in “conflict diamonds”, not always with full success.

Gold deposits exist in Grand Cape Mount and Sinoe. In contrast to iron ore production, the diamond and gold mines are organized on a small scale. The government estimates that there are up to 100,000 gold and diamond prospectors in Liberia. 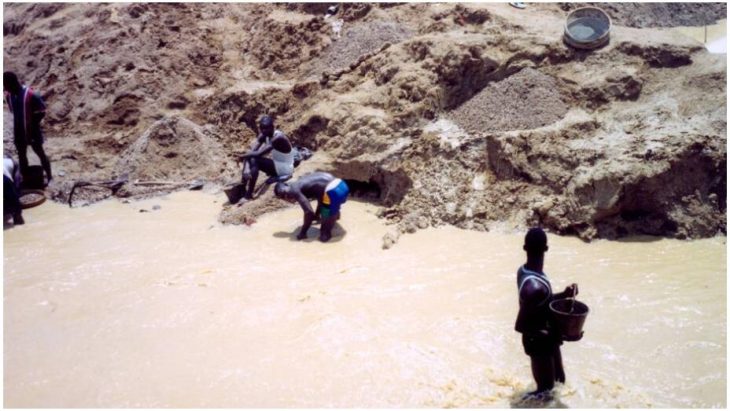