There is a mixed legal system consisting of civil law (based on Anglo-American law) and common law. All formal courts are part of the national system and are under the supervision of the Supreme Court. It is located in the “Temple of Justice” on Capitol Hill in Monrovia. It is the last instance in constitutional questions and can therefore also determine the constitutionality of legislation. The Supreme Court is also the final court of appeal in all cases. The court consists of the Chief Justice of Liberia and four Associate Justice, who are appointed by the President and confirmed by the Senate.

The Circuit Courts are district courts and have first instance jurisdiction over the most serious cases, including grievous bodily harm, burglary, rape and murder.

The local courts, Magistrates Courts, are responsible for civil and criminal jurisdiction. Very serious cases, including rape, murder, or burglary, must be referred to the Circuit Courts after preliminary hearings.

Justices of Peace are lay judges. You are empowered to rule in a very limited area of civil and criminal matters.

In addition to formal law, there is also traditional law in rural Liberia. According to computergees, Clan Chiefs, City Chiefs, and Paramount Chiefs, the local traditional authorities, have the authority to resolve civil matters but have no authority over criminal matters. When there is a conflict between formal law and common law, the Supreme Court has ruled that formal law prevails. In practice, however, customary law is often used in such cases.

Far-reaching judicial and security reforms have been carried out since the end of the war. As before, however, the capacities are not sufficient to guarantee adequate access to the law, which is why international and national organizations support access by establishing legal advice and mediation offers, in some cases specifically for women.

Since the end of the war, Liberia has made progress in granting international human rights. However, there are still a number of challenges to be overcome, particularly in the area of justice and the rule of law. Poor infrastructure, a lack of staff and corrupt practices lead to frequent delays, which have led, for example, to restricted access to justice and severe overcrowding in prisons.

Rape and violence against women and girls remain high, despite the passage of a law in 2006 that provides relatively high penalties for rape. Many of these crimes do not go to court and when they are reported, the process is slow to implement. Many women and girls are exposed to other forms of domestic violence. In large parts of the country, female genital cutting is the social standard and difficult to circumvent for many girls, although it is a criminal offense before the age of 18.

Other human rights restrictions include the criminalization of gay and lesbian relationships and some restrictions on expression in public protests and in the press.

The Independent National Commission on Human Rights (INCHR) has been responsible for promoting the national implementation of and compliance with the international and regional human rights treaties signed by Liberia since 2009, but has so far only appeared publicly on a selective basis.

Corruption in Liberia is a problem on several levels. On one side of the scale are the major bribery scandals, in which international companies bribed members of the government in order to obtain raw material mining concessions on favorable terms, or in the case of the award of oil concessions.

At the other end of the scale are the everyday bribes that Liberians have to pay if they want to be treated in hospital, need permits or papers, do not want to be delayed by the police unnecessarily, need school reports in good time to go to secondary school can apply – to name just a few of the typical examples. This type of corruption is included in the Transparency International “Corruption Perception Index”shown, Liberia ranks 137th out of 180 states (2019). Even if the sums involved are small, the result is that people are burdened with unnecessary costs for products and services that many of them find difficult to finance at regular prices. On the other hand, wages in the public sector are low and often not enough for a living without additional earnings.

At the middle level, for example, there is still the misappropriation of international aid funds, apparently during the Ebola crisis.

There are organizations to combat corruption – from the Liberia Anti-Corruption Commission (LACC) to the General Auditing Commission (GAC) and the Commission for Public Procurement and Concessions (PPCC). However, they often lack the powers and resources to prevent bribery. The TV show ” Integrity Idol ” on Liberian television is an innovative method of countering corruption. Viewers can vote there on the most honest civil servant in Liberia to promote correct behavior and raise awareness of the problems of corruption.

For most citizens of Liberia, the radio is the main source of information. One of the leading media outlets is the former UNMIL Radio, the station of the United Nations Mission, which was rededicated to ECOWAS Radio in March 2018 after an official handover. Including community radio stations, which are mainly in the rural areas of popular delight, there are nearly 80 registered radio stations. The private television stations play a role in Monrovia in particular, their reach is limited. Various newspapers are published in Monrovia, including Front Page Africa,The New Dawn and Daily Observer.

The freedom of the press is in the Constitution stipulated, but the media operate not always without restrictions by the government. But there are also exceptions, for example before the 2011 elections. In the heated situation, journalists were exposed to more threats. Among other things, the laws against defamation (libel laws) are used to restrict the freedom of the press. On July 21, 2012, President Johnson Sirleaf signed the Table Mountain Declaration, a step towards the end of repressive measures against African journalists. On the 2020 press freedom ranking Liberia ranks 95th out of 180 countries examined. 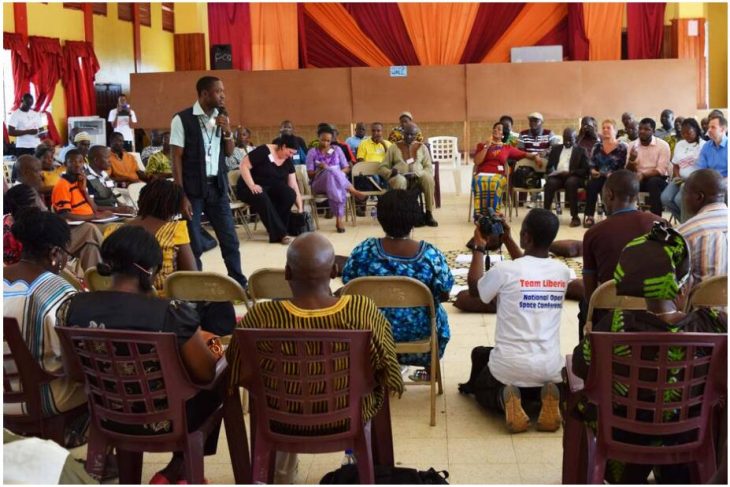