The early decades of the young republic were marked by armed conflict with indigenous peoples and the annexation of the formerly independent Republic of Maryland in 1857.

At the “Congo Conference” in Berlin in 1885, at which the colonial powers divided Africa among themselves, Liberia was able to retain its sovereignty, but lost about a third of its national territory, especially in the southeast, to France. The current borders of the country go back to the decisions of this conference.

Economically, the Liberian elite concentrated on long-distance trade and the establishment of a plantation economy. However, the Liberian state remained economically weak and was dependent on foreign lenders until the middle of the 20th century. This dependency increased at the end of the 19th century when the sailing ships of the Liberian merchant fleet lost their competitiveness to the steamers of foreign companies. At that time, Liberia also exported forcefully recruited workers on a large scale as so-called “contract workers” to the Spanish colony of Fernando Po (today’s Equatorial Guinea). The terms of employment, recruitment and contract of these workers were the subject of an investigation by the League of Nations between 1923 and 1930. Irony of history: Liberia, home of freed slaves,

Domestically, a system of “black apartheid” developed, with political power and economic influence concentrated in the hands of the Americo-Liberian minority. Central institutions of this supremacy were the True Whig Party, founded in 1878, and the Masonic lodges. During this time the dualism arose between modern statehood on the coast and indirect rule (exercised by the traditional leaders) in the hinterland, the consequences of which can still be felt today.

Between the Second World War and the 1990’s, Liberia was one of the United States’ most important allies on the African continent and received large sums of military and development aid. The reign of 19th President William Tubman (1944-1971) is considered the golden age of recent history in Liberia. During his term of office there was annual economic growth of 11.5 percent (between 1950 and 1960), as well as far-reaching domestic political reforms. At the time of his death in 1971, the country was at the zenith of its economic development as the world’s leading exporter of rubber, the third largest exporter of iron ore and with a booming free port in Monrovia.

According to businesscarriers, more and more indigenous Liberians came from the provinces to the coastal regions in search of work. The Liberian government tried to prevent this for a long time, but was no longer able to curb migration from the 1940’s onwards. In the decades that followed, the Liberian government received hundreds of millions of dollars in free foreign investment that destabilized the Liberian economy. The state income rose considerably, but was grossly embezzled by government officials. Growing economic inequality increased animosity between indigenous groups and Americo-Liberians.

After the death of William Tubman, he was succeeded by his longtime Vice President William Tolbert in office. Despite cautious reforms at the beginning of his government (he admitted an opposition party), his term of office (1971-1980) was marked by the economic crisis and growing domestic political instability. Falling prices – especially for rubber – in the world market created growing problems, while the opposition protested against the predominance of the Americo-Liberians. Dissatisfaction with government plans to raise the price of rice in 1979 led to demonstrations in the streets of Monrovia, the “Rice Riots”. Tolbert ordered his troops to shoot the demonstrators, seventy people were killed. Riots broke out across Liberia, which ultimately led to a military coup in April 1980. 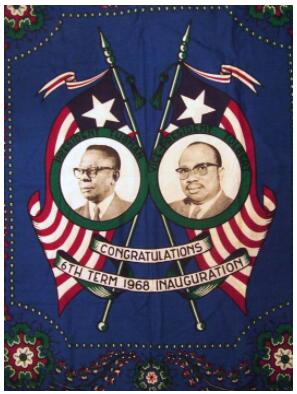 Very early on, there were links between Liberian politics and raw material production and mining. In 1887, British planters began experimenting with rubber plantations with government permission. In 1889 three British entrepreneurs applied for their own concession for a rubber trading company, both of which were approved as part of Liberia’s open door policy. This led to the establishment of the first coastal rubber companies. The most important producer was the English-Liberian Rubber Company, founded in 1904 respected, she created a nationwide syndicate of rubber collecting stations. The company, which is run with state participation, paid a contractually fixed share of the Liberian state budget and thus became a model for future business ventures in Liberia.

In 1904, West African Gold Concessions, Ltd. applied for a concession for Liberian territory to systematically examine the country’s rivers for gold content. After the first knowledge about Liberian gold deposits, the British entrepreneurs agreed with the Liberian government favorable mining rights in exchange for construction work to be carried out by the British in the country.

At the beginning of the 20th century, the Liberian state had to take out loans on poor terms from British banks and consortia, as well as from German traders, due to high debt, and thus threatened to forfeit its sovereignty. In 1912, the USA intervened in this situation with a long-term loan, on condition that the four great Western powers (USA, Great Britain, France and Germany) would control the Liberian state finances by 1926.

Liberia’s economic rise began with the granting of a concession by the Liberian government for the world’s largest rubber plantation to the American company Firestonein 1926. Closely linked to this concession was a loan from the company to the Liberian government of US $ 5 million to avert impending national bankruptcy. In the years that followed, numerous other rubber plantations were built and in 1950 natural rubber products made up more than ninety percent of the country’s total exports. With the outbreak of the Second World War, Liberia’s economic and strategic importance for the Allies grew. Rising raw material prices ensured rapid economic growth that continued into the fifties and sixties of the 20th century. During this time, major investments were made in the transport infrastructure (construction of the ring road, expansion of the airport and port).

In the 1960’s and 1970’s, foreign companies from Western Europe and the United States invested large sums, primarily in the mining sector and in the associated transport infrastructure (railways and ports). Iron ore mines originated in the Bomi Hills, the Bong Range and the Nimba Mountains. These investments also included the Bong Mining Company, which was owned by Thyssen, Krupp and Hoesch. In the 1970’s it represented the largest German investment by the German economy in sub-Saharan Africa and is a symbol of the importance of trade relations between the Federal Republic of Germany and Liberia. The mining companies maintained company settlements with schools, leisure facilities and hospitals.