West African Liberia is located on the Atlantic coast between Sierra Leone and Côte d’Ivoire. In the north it borders on Guinea. The national territory covers 111,369 km². It is distributed over 96,320 km² of land area and 15,049 km² of territorial waters. For comparison: Liberia is a little bigger than Portugal, but with around 5 million residents it is less densely populated (Portugal has almost 11 million residents). The extension of the country is 520 km in north-west-south-east direction and 270 km in south-west-north-east direction.

You can get an overview on the Liberia pages of the Federal Foreign Office, the CIA World Factbook and the World Bank. More detailed information can be found on the website of the Liberian Institute for Statistics and Information LISGIS. The United Nations Development Program (UNDP) website also provides a summary of the indicators of human development in Liberia and explanations.

According to a2zgov, Liberia is located on the Atlantic Ocean, on the so-called Pepper Coast. The country has a largely inaccessible coastline (560 km), consisting of mangroves, swamps, beaches and estuaries. The surf and currents are strong . Of the approximately 9.6 million hectares of land, about half are forest, the other half consists primarily of arable land.

Behind it rises the central plateau and hill country, criss-crossed by valleys and rivers, the hills of which reach heights of up to 400 m above sea level. It is largely used for agriculture.

In the center and east of the country there are large rainforest areas, including the Sapo National Park in Sinoe County, which has a worldwide unique biodiversity, both in terms of mammals and plants. Around a third of the area of ​​Liberia is still covered with original rainforest. This means that the country has almost half of the remaining West African rainforest.

In the north and northeast, the country also has a share of the Nimba Mountains, a low mountain range that is under nature protection and in Liberia has a height of almost 1385 m above sea level. The highest mountain, Mount Nimba, is 1752 m high and is located in Guinea, in the triangle with Côte d’Ivoire and Liberia. 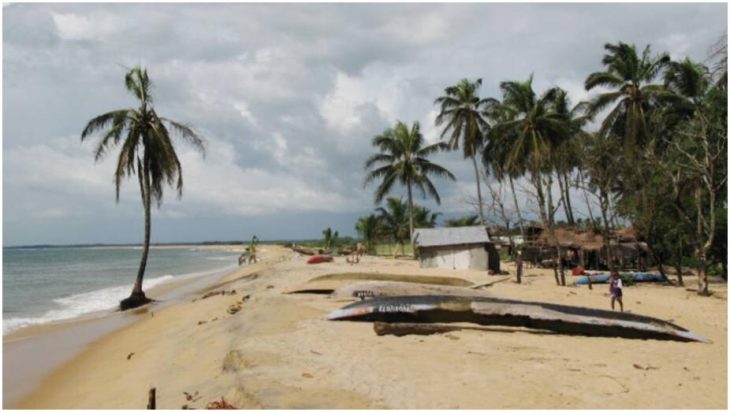 The climate is predominantly humid, tropical-hot and is one of the always humid tropics. Temperatures on the coast are between 24 °C and 27 °C, inland between 22 °C and 28 °C. The average is 26 °C in January and 24 °C in July, with little temperature difference between day and night.

During the rainy season from May to October, heavy rainfall is measured in all parts of the country, and road traffic in the hinterland often collapses for weeks. The coast of Liberia is one of the world’s rainiest areas. In the capital Monrovia, the annual rainfall is 5,130 mm, in Robertsport (northwest coast) 5,210 mm and in the drier south-east near Harper only 2,500 mm. The average amount of precipitation decreases sharply towards the interior of the country, but increases again in the low mountain ranges in the north.

In the interior of the country in particular, the dry season from November to April comes with the dusty Harmattan wind, a trade wind from the northeast, from the southern Sahara, which cools the air during the night – especially in December and January.

In 2010 the first licenses for the exploration of oil deposits off the coast of Liberia were granted. At the end of 2011, the search for oil in the offshore area began.

In the north-west and south-east of the country in particular, many concessions have been granted for forest areas in order to export tropical timber. Up until 2012, the president had issued licenses to international companies that allowed up to 58 percent of the rainforest to be cut down. Through an initiative by civil society and the Norwegian government, the Liberian government contracted in 2014 to review these concessions and partially revoke them. The Norwegian government and the World Bank support the country in developing more sustainable forestry and income generation. A persistent problem is the illegal logging of forests.

Commercial agriculture is dominated by rubber production. The largest producer in Liberia is the Firestone Natural Rubber Company with around 7,000 employees. Their plantation in Harbel near Monrovia is the largest rubber plantation in the world with an area of 200 square kilometers.