After the economic boom of the sixties with annual growth rates between four and seven percent, a phase of economic stagnation began as early as the seventies, as a result of falling world market prices for Liberian products. Rising prices and growing unemployment contributed to the worsening of the crisis and created social and political tensions, which ultimately led to the military coup in 1980.

According to constructmaterials, the two civil wars between 1989 and 2003 had a major negative impact on the Liberian economy. Between 1987 and 1995 the country’s gross national product fell by 90 percent. At the time of the 2005 elections, the average income in Liberia was only a quarter of the 1987 figure and only a sixth of the 1979 figure. The economic collapse affected almost every sector of the Liberian economy. With the flight of large parts of the population from the hinterland, agricultural production collapsed dramatically, the iron ore mines closed and the production of rubber was significantly reduced. Rice production plummeted 76 percent between 1987 and 2005, while the falls in finance and services ranged from 69 to 93 percent over the same period. The country’s transport infrastructure was largely destroyed.

A direct consequence of the civil war and the associated economic crisis is also the collapse of public finances. Since the mid-1990’s, the Liberian government was no longer able to service international loans. In 2006, the country had US $ 4.5 billion in external debt, equivalent to 800 percent of gross national product, the worst ratio in the world according to the IMF. In 2010 Liberia – after fulfilling the conditions imposed for this – was canceled around 90 percent of its debts as part of the initiative to reduce the debt burden of the heavily indebted poor countries (HIPC). In recent years, however, the debt has increased significantly again.

For several years, economic growth has risen continuously, with a rate of 4.6% in 2009 to 7.5% in 2013. Liberia thus recorded the second largest economic growth on the African continent after neighboring Sierra Leone. The basis for this positive development was primarily the increase in exports and the increase in raw material prices (especially rubber, palm oil and iron ore). Due to the lower raw material prices and the outbreak of the Ebola epidemic, this trend has not continued since mid-2014.

In 2010 the government began collecting royalties (USD 1.57 million) from the extractive sector. Before the Ebola crisis, this source of income was estimated to grow to US $ 30 million in 2015, including the resumption of iron ore mining and the expected extraction of offshore oil. This assessment has now become unrealistic.

In 2011 a report was published by a number of national and international organizations describing measures to ensure that the Liberian population and infrastructure will benefit from oil production.

The investment conditions for private companies are difficult. Mining, the most important sector for foreign companies, is suffering from the current low raw material prices. The withdrawal of the UNMIL troops led to a significant reduction in consumer goods demand. 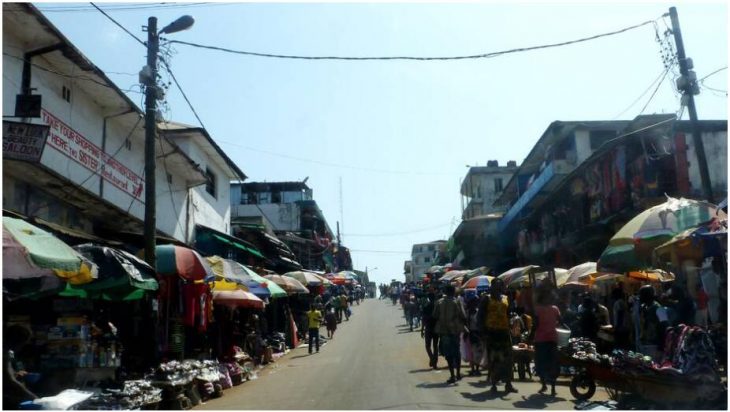 Despite the enormous reserves of raw materials, Liberia’s trade balance is in deficit. For Liberian foreign trade, iron ore, natural rubber and rubber, tropical wood, diamonds, gold, cocoa, coffee and pineapple are the most important export goods. The Liberian shipping register is one of the largest in the world and accounts for a large part of the West African country’s foreign exchange income. At the same time, food – especially rice – and fuel have to be imported at great expense.

Liberia’s major trading partners in 2018 included the United States, the European Union, China and African countries. Much was imported from Asia, especially from China, Europe and North America.