On April 12, 1980, the military, led by Sergeant Major Samuel Doe, launched a coup against the government. President Tolbert was assassinated along with other members of his cabinet. With Doe, for the first time in the history of Liberia, a member of the indigenous population was at the head of the state (Doe comes from the Krahn ethnic group). After the coup was first welcomed by the population, Doe’s reign (1980-1990) showed increasingly authoritarian features. For example, he had his co-conspirators from the time of the coup murdered as potential rivals and favored members of his own ethnic group when filling important offices. Under pressure from the United States, he organized elections on October 15, 1985, in which the opposition parties were not allowed. Even so, for strategic reasons, the US remained loyal to Doe and even increased military and development aid.

In December 1989 the Liberian civil war began with the invasion of Liberian territory by the rebel movement National Patriotic Front of Liberia (NPFL) under the leadership of former member of the Doe government Charles Taylor from Ivory Coast. Taylor received support mainly from those ethnic groups that had been marginalized by the Does government, such as the Gio and Mano.

In mid-1990, Taylor controlled most of Liberia. His troops were close to Monrovia. In July, Prince Yormie Johnson split from the NPFL and founded the Independent National Patriotic Front of Liberia (INPFL). Both NPFL and INPFL fought their way to Monrovia. In August 1990, the Economic Community of West African States (ECOWAS) dispatched a military reaction force called the Economic Community of West African States Monitoring Group (ECOMOG)with 4,000 soldiers to restore order. On September 9, President Doe received the ECOMOG troops in Monrovia Free Port, where he was captured, tortured and killed by Prince Johnson and his INPFL. In November 1990, ECOWAS reached an agreement with some major Liberian groups, but without Charles Taylor, on a transitional government (IGNU) under President Dr. Amos Sawyer.

Sawyer ruled most of Monrovia, while the rest of the country was ruled by various warring factions. In June 1991, Former Do’s supporters and soldiers, mainly Krahn and Mandigo, founded the United Liberian Movement for Democracy in Liberia (ULIMO) and, with the support of ECOMOG, began the fight against the NPFL in western Liberia in September.

In the following years, Sierra Leone was drawn into the Liberian civil war. Taylor supported the rebels of the Revolutionary United Front (RUF) who fought against the government in Freetown and was rewarded by the rebels with Sierra Leonean diamonds. After several peace agreements were not kept, the first Liberian civil war ended in 1996 with the Abuja Peace Agreement. More than 200,000 Liberians perished in this war, and around a million people fled to neighboring countries.

A hasty disarmament and demobilization program by the various warring parties was followed by presidential elections on July 19, 1997. Charles Taylor was elected 22nd President of the Republic of Liberia as a candidate for his National Patriotic Party, NPP under the auspices of the United Nations. His election victory (with around 75 percent of the votes cast) was probably primarily the result of Liberians’ fear that any other result would lead to a resurgence of violence.

According to cheeroutdoor, the second phase of the Liberian civil war began in 1999 with the invasion of the rebel movement Liberians United for Reconciliation and Democracy (LURD) (successor organization to ULIMO) from neighboring Guinea. It operated primarily in Lofa County in the north of the country and received support from the governments in Conakry, Guinea and Freetown (Sierra Leone). Taylor simultaneously supported the opposition factions in both countries.

The support of the RUF in Sierra Leone led to Resolution 1343 in the UN Security Council in March 2001, which banned all arms and diamond deliveries from Liberia and a number of Liberian government members from traveling to UN states. After the imposition of a trade embargo on diamonds, Taylor financed his state primarily through the export of precious woods.

From the beginning of 2003, a second rebel movement, the Movement for Democracy in Liberia (MODEL) began a campaign against the Taylor regime in the south. MODEL received support from the Ivory Coast government. Taylor’s soldiers were not up to this two-front war, and in mid-2003 the LURD rebels besieged the capital Monrovia. Thousands of civilians were trapped between the fronts and suffered from famine, artillery fire and rape by members of all parties to the conflict.

On August 11, 2003, as a result of the Accra peace negotiations, President Taylor resigned and went into exile in Nigeria. Shortly afterwards, the first units of the West African peacekeeping force ECOMOG arrived in Monrovia. On October 1, 2003, this peacekeeping force was replaced by the United Nations Mission in Liberia (UNMIL). With a nominal strength of 17,000 men and women, UNMIL was one of the largest missions of the United Nations. Her mandate included monitoring the peace agreement, demobilizing the armed parties and organizing free and fair elections.

The documentary ” Pray the Devil Back to Hell ” describes how the success of the peace negotiations in Accra came about. He also tells the story of peace activist and Nobel Prize winner Leymah Gbowee. 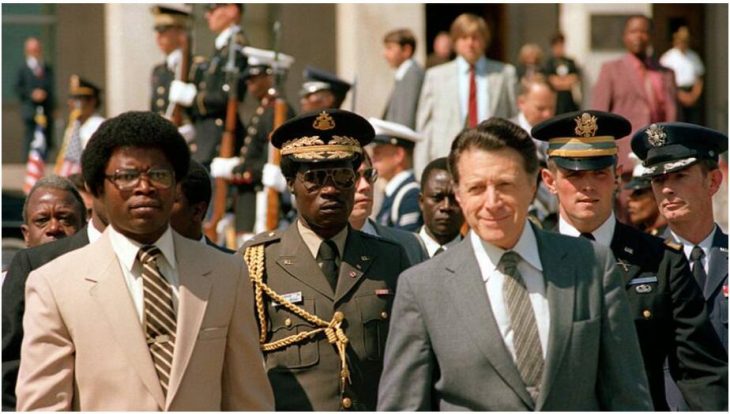