A substantial part of the Liberian population works in agriculture, especially women, who make up the majority of the workforce in this sector. A large proportion of agricultural production is used for food self-sufficiency. Nevertheless, a high proportion of the Liberian population suffers from inadequate nutrition; the proportion of chronically undernourished young children (under five years of age) was estimated at 39 percent according to a 2015 report by UNICEF. Chronic underinvestment in this sector and inadequate transport infrastructure (which hinders market access for rural producers) are responsible for this situation. The Ebola Crisis aggravated this situation in 2014-15, which necessitated additional supplies from the World Food Program.

Subsistence agriculture or traditional agriculture is mainly characterized by the cultivation of rice and cassava, and to a limited extent also by keeping small animals. In addition to traditional agriculture, fishing also plays an important role in supplying the population. However, the livelihood of local fishermen is threatened by the overfishing of Liberian waters by foreign trawlers.

Commercial agriculture is dominated by rubber production. In contrast to most other industries, the export of natural rubber continued even during the war. The country’s rubber exports are valued at over US $ 100 million. Due to the lower prices for rubber, profits in this area have declined in recent years. The largest producer of rubber in Liberia is the Firestone Natural Rubber Company with up to 7,000 employees. Due to the lower rubber price, more than 400 workers were laid off in 2016, and another 75 in 2018.

Their plantation in Harbel near Monrovia is the largest rubber plantation in the world with an area of 200 square kilometers. According to dentistrymyth, although the company is the largest private employer in Liberia and claims to offer its workers (and their families) numerous free social benefits, the company has come under fire from trade unionists and environmental activists. In November 2005, the International Labor Rights Fund sued Firestone in an American court in Liberia for working conditions reminiscent of forced labor. The criticism mainly relates to the payment of piece wages and the employment of children on the plantation in Harbel. There were multiple protests by rubber workers and clashes with the police between 2005 and 2008. In addition, in November 2014 an American television station published a documentary depicting Firestone’s connection with Charles Taylor during the Civil War.

In addition to Firestone, there are various other commercial plantations as well as a large number of smallholder producers whose crops are bought by Firestone. Although this area of the economy has boomed in the years since the end of the war due to high world market prices, the Liberian government expects growth rates to stagnate in the short term. These are justified not only with the now falling world market prices for rubber, but also with the over-aged tree population (the productive phase of a tree lasts around 25 years) and the poor general condition of most plantations.

From 2010 to 2012 the Swedish company Vattenfall was involved in Liberia with the aim of using wood chips from the old rubber trees to generate energy in thermal power stations – for example in Berlin. The abandonment of the controversial project left many farmers with no income.

Beyond the rubber sector, the government sees growth and export opportunities in the production of cocoa beans, coffee and palm oil.

Until 2003, the forest sector was an important part of the Liberian economy. With a production of about 1 million cubic meters of wood and exports valued at about 100 million US $ per year, this area was responsible for 50 percent of the export income and 20 percent of the gross national product in the reign of Charles Taylor. About 7,000 Liberians were employed in this sector at the time.

Between 1996 and 2000 the export of tropical timber from Liberia increased from 11,000 to over 640,000 cubic meters. The export of tropical timber played an important role in financing the Liberian civil war. European, Chinese and Malaysian timber traders were involved in this timber trade. The British non-governmental organization Global Witness and the United Nations have shown that the Oriental Timber Company (OTC) in Buchanan not only exported precious woods, but also imported weapons for Taylor’s soldiers, circumventing a United Nations arms embargo. There was a trade embargo between 2003 and 2007 of the United Nations for precious woods from Liberia. Since the end of the war there have been efforts to fundamentally reform the forest sector. This process is supported by the international donor community as part of the Liberia Forest Initiative.

Liberia’s forestry is also part of the international initiative to improve transparency in the extractive industries (EITI). Compliance with their standards is monitored by LEITI (Liberian Extractive Industries Transparency Initiative). Nevertheless, the sustainability of the award of concessions is very controversial, as a report by Global Witness 2012 showed.

According to articles in the New York Times and the British Guardian, the Johnson-Sirleaf government granted concessions to investors for around a third of Liberia’s land area between 2006 and 2011. The international companies use this land for forestry, mining, rubber and palm oil production. Since the end of the civil war there have been numerous inner-Liberian conflicts over land. Now there are land conflicts between the local population and international investors. In about 90% of the civil proceedings in Liberia it comes to land issues.

In many cases, the concessions that are given to large international companies lead to further impoverishment of the local population, as the Liberian activist for social justice and environmental protection, Silas Siakor, describes in the radio interview above . In 2016, a coalition of civil society organizations called on the government to pass the land rights bill before the 2017 election so as not to endanger peace in the country. Ultimately, the law was passed in September 2018. 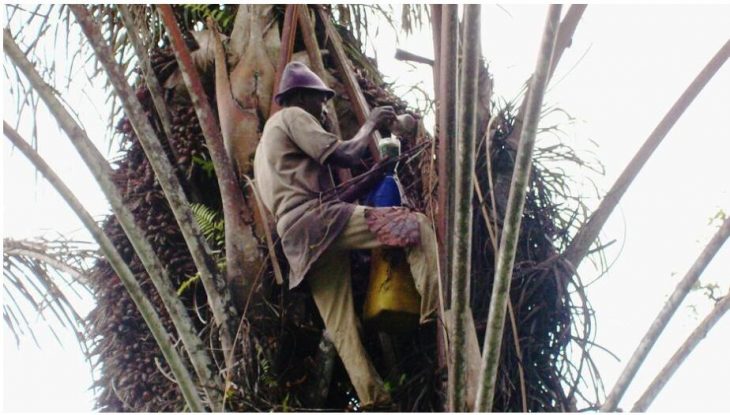