Arcade il Metastasio; arcade the Parini. He too has a large copy of sonnets, chapters, melodies, songs, madrigals, epigrams, where are the silly jokes of the Bernese rimeria, the swooning or mischievous wits that delighted the ladies, the elegant frivolity of Metastasian melica. But the soul of the new bourgeoisie prevails in Parini over the softly eighteenth-century soul inspiring these verses, which, especially in Milan, is being formed in the invigorating climate created by the reforming princes and which will soon be the guide and ruler of the fortunes of Italy. This soul, more whole, more robust, freer, feels the classicism otherwise the Arcadian soul is not used to; penetrates deeper into the formal virtues, perceives its masculine vigor in thought in sentiment in expression, appreciates primitivism or the primitivism echoes of ancient literature. It is a return to the fresh impressions of the Renaissance with different imitative intentions, no longer of forms, but of form; it is the first manifestation of that classical essence which Italian literature, freed from the protection of classicism, will keep as its character and defense against any kind of indiscipline.

Thus, in contrast to the modest lovers of metastasian melica, to Lodovico Savioli, to Aurelio Bertola, to Iacopo Vittorelli, a succession of poets arise, not better, but different from those in ways and forms, which flaunt a more severe classical education. and a varied scientific and philosophical culture: Agostino Paradisi who orazianly intertwines sentences with images in odes devoid not of stylistic nobility, but of intimate poetry; Luigi Cerretti, who knows how to give a certain splendor of classicism to his vulgarity and frivolity; Francesco Cassoli, not an unhappy imitator of Horace in the slight melancholy of his epicureanism; Angelo Mazza, prone to pindarism and philosophical poetry in odes on the causes and effects of harmony, and, a lyricist of less weak wing, Giovanni Fantoni,

In Parini, poet, that new conception of life, which matures, and this neoclassicism, intensely living the profound life of his spirit, thought and feeling, leap to the imagination, forms of his soul, unmatched for clarity and precision; and the nineteen famous odes are born, the  Day is born , solemnly opening the way to the art of the second Italian literary period.

Not all odes touch an equal poetic height: in the former, which also affirm innovative principles of art, there is nevertheless a hint of Arcadia; in others that intimate lyrical organization of the teaching content fails, so that this living, indissoluble unity, together with the form, does not kill poetry. But the calm wing of Parinian inspiration draws morality in its flight and transforms it into a ghost of exactness, of luminosity, of perfect concinnity, when in  the Fall  bursts the cry of an inflexible conscience at the advice of the feeble contemporary conscience or in  Need  . sounds the exhortation with senses of pity for the poor dragged to crime by that “horrible persuader of evils”; when in the ode  to Silvia on the guillotine dress the poet rises to detest the perversion of fashion as dangerous to the innocence of the soul, or in that  Alla Musa  caresses the figuration of domestic life, blessed by love and virtue, and of the poet, serene in worship of the good, of the true, of the beautiful. In these, and in other odes where the sweet rapture felt in front of female beauty dies in the resigned sadness of the old priest, classicism, feeble and dressed up in the Metastasian song, becomes modernly alive and substantial in the well-coherent constructions, in the varied articulation of the old rhythms, in the iconic effectiveness of the language, in a word in the visions of a renewing soul.

According to Countryvv, these virtues of art also characterize the  Day , which satirizes the frivolous, smancerous costume corrupted by the Lombard aristocracy. From the contrast between the frivolity and the sumptuous and ceremonious appearances of that life, a contrast of which the intemperate and sincere conscience of Parini feels all the depth and the redeemability, the ironic attitude arises spontaneously in the imagination, which an act of will, a rhetorical act , perpetuates through the hundreds of lines of the poem. Here lies the main flaw of the  day, because irony is not a disposition of spirit that can last long, when it is not transformed, or, better, has no root in that not already disposition, but organic spiritual temperament, which is humor. Except that the fervent soul and the imagination of Parini sometimes react to the rhetorical will, and the irony becomes sarcasm or unveiled indignation.

Far from any specific imitation of classic models, the  Giorno with the search for a well-balanced structure, with the admirable finiteness in the figuration of characters and scenes, with the novelty of highly effective stylistic constructions, with the solid and varied temper of the hendecasyllable, not without reason compared to the Virgilian hexameter, it first of all embodies that essential classicism, which will be the indefectible and salutary viaticum of our literature. Didactic in substance, the poem is exquisitely descriptive of the customs of the early eighteenth century, as descriptive of that same life, but with much less penetration and conviction than satire, are other poetic works of that age, such as the sermons of Gasparo Gozzi, in which the reproof of contemporary softness is suffused with a veil of resigned sadness, and  Cicero by Giancarlo Passeroni, an immense poem of too easy octaves, which good-naturedly criticizes and derides all sorts of cheap or vicious people. 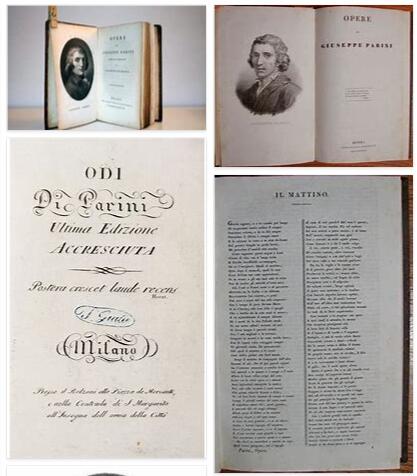