The Carducci. – In Carducci classicism is not an extrinsic imitation of ancient forms; on the contrary, it is the immediate and natural form of that soul of his, alien to any sentimentality, trusting in the free development of human energies, yearning for an ideal of a straight, sincere life, governed by a high awareness of duty; it is sharpness of representation, dignity of style, vivid purity of language. So much so that Carducci’s classicism does not disdain the study of modern literatures, especially French and German, nor the romantic modernity of a certain exoticism and the poetry of ruins, nor above all the representations of the strong municipal Middle Ages, congenial to that robust Maremma spirit, like the austere primitive and republican Romanism, like the flourishing Renaissance, like the great revival of the peoples that starts from the French Revolution and goes down to the first fulfillment of the political rebirth of the Italian nation. It is undeniable that Carducci’s poetic work is affected by his great historical and philological erudition and by his critical spirit; but in the production of its full maturity (New rhymes ,  first and second barbaric Odes  ) doctrine and criticism are so innate to his soul that a mighty breath of poetry springs from it more than the gravity of literature. The same reproduction of the classic meters that he experienced in the barbaric hatreds was born from an intimate expressive need; so much so that if the so-called barbarian meters had some luck there and then, they did not take long to fall into dissuetude as forms of an individuality that does not repeat itself. What remained and remains of Carducci’s poetic teaching is the education to respect for art, the restoration of that noble sense of form which, traditional in Italian literature, had been affected by romantic sloppiness.

Friends, disciples, admirers of Carducci attempted the skies of poetry with a more tenuous wing, along the trail marked by him: Giuseppe Chiarini, Severino Ferrari, Guido Mazzoni, Giovanni Marradi; while other voices, more or less free from Carducci’s influences, rose in the last thirty years of the century with their own characteristics, to attest to the reborn energies of the Italian people also in art. A late follower of Montian scenographies, Mario Rapisardi wanted in more symbolic poems to draw poetry from naturalistic materialism, but he was a better poet when he romantically sang the deserted aspirations of the human soul caught in the unexplored mystery of reality. Poet of singular originality, Arturo Graf expressed with dark images, with symbolic visions, with fantastic legends the painful sense of the evil that hangs over men. With beautiful breadth and ease of inspiration he poet Enrico Panzacchi; of France and in particular from Baudelaire derived nourishment for his naughty streak Olindo Guerrini, witty mocker of romantic sentimentality, and Domenico Gnoli, who came out of the pale Roman poetic school before the seventies, refreshed with new vivacity, under the name of Giulio Orsini , not new motifs of poetry and sometimes knew how to create new ones. Younger than these, Giovanni Alfredo Cesareo shapes his multiple sensibility as a learned and passionate man in traditional lyrical forms; and already before the end of the century. XIX had also revealed their temper as poets Giovanni Cena, an outspoken singer of painful affections, Giulio Salvadori, inspired by civil and religious ideals, and Ada Negri,

Pascoli and D’Annunzio . – But over all the poets rose high between the last decade of the century. XIX and the first of the XX, Giovanni Pascoli and Gabriele D’Annunzio, who put themselves in their first tests along the path opened to art by Carducci, then followed their own paths, giving Italy the splendor of new and original poetry and art lyric and narrative fruitful hints of inspiration and technique.

According to Localtimezone, mystical spirit, deeply in love with rural life and nature, torn between his perennial aspiration for good and the sight of experienced human wickedness, all absorbed in a desire for love and aching for all the pains in the world, Pascoli had alive, anguished, profound the sense of the mystery of pain and death that hangs over universal life and tried to overcome and console it in a heartfelt rush and in a fervent exhortation of love for all beings. With the naive soul of a child he tasted the sweetness of an affectionate intimacy in the unconscious and innocent life of small human and irrational creatures, he felt with human sympathy every spectacle of a calm and serene nature, he grasped with finesse, never reached by any other poet, the faint pispigli, the subdued voices, the evocative silences rising up from the mystery of being. And this intense lyricism of his soul expressed in fragmentary and fleeting notations of life, in large structures of rural and historical paintings, in renewals of ancient myths, deriving generic inspirations from the French symbolists and English lakeists, and from the classicism of his culture that exquisite sense of the Italian and Latin form, which leads it into the river of the great Italian poetic tradition, but which sometimes, especially in the compositions of maturity, is abstracted into a cult of the poetic genre, of the word, of sound: poetry that comes from outside and does not accord with sincerity of intimate inspiration.

Lyricist, novelist, playwright, D’Annunzio affirmed full and perfect his individuality as a poet in the  Laudi; individuality which is a profound meaning and a yearning longing for the primordial forces of life, a fervent naturalism that tends to lead man, when by virtue of his intellect and body he is worthy, to the unbridled freedom of pleasure and domination and to the unlimited enjoyment of life. Thus he celebrates the joy of triumphant loving passion, of the passionately contemplated beauty of art, of the spirit flowing back into the bosom of mysterious nature; and as a spectacle of beauty and strength, history also relives in the imagination, investigated with the sense of an artist and beautifully represented. In his art D’Annunzio transfers, reshaped and harmonized with it, the preciousness of the most refined writers of every nation and uses them to obtain admirable effects of style, sound, rhythm, the most peregrine riches and properties of the Italian language; so that one could say a virtuoso of form, if his poetic soul were not part of this very dream of formal beauty, which accompanies himself alive and throbbing with every movement of his profound being and illuminates both his naturalistic pages and his prose of heroism and mystical contemplation, inspired by the war and subsequent events in Italian history to the strenuous soldier and leader, to the vigorous apostle of faith and action. 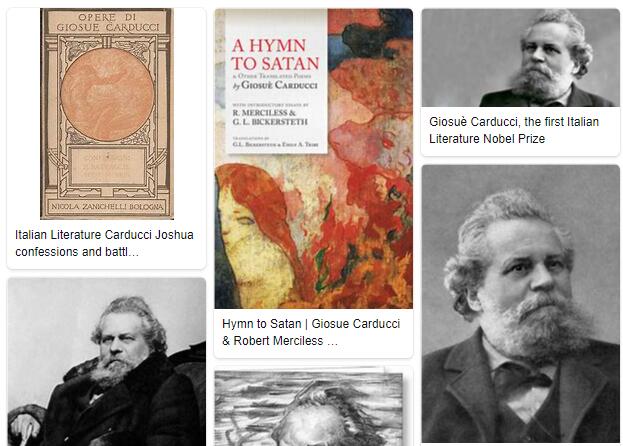