Italy Between the 12th Century and 13th Century

Birth of the Municipalities: in Italy In the north, the cities extend and consolidate their autonomy, starting to become real states, expanding into the countryside, attracting and absorbing it into their economy, into the network of their mercantile and artisan interests. Genoa and Pisa are competing for a penetration into the Mediterranean, alongside the already Byzantine cities, as if to open the roads that will soon be beaten by the crusades, and the maritime cities derive economic benefits from the crusade. The larger cities economically and politically incorporate the smaller municipalities, while the rural municipalities arise from the liberation of the serfs in the countryside.

1154: the new king of Germany, Frederick I of Swabia, known as Barbarossa, descends in Italy in order to reaffirm his authority over the kingdom, first of all bending the cities which, with the usurpation of gifts, tend to escape to imperial power. The emperor can only report successes against some Italian municipalities, facilitated by some of these same municipalities which, in fear of being absorbed by the most powerful cities, line up alongside him.

1167: Pontida oath. The coalition of all the cities threatened in their autonomy rises against the emperor, gathered in the Veronese League and the Lombard League; the pope and the Normans of the Kingdom of Sicily intervene in the block, one and the other equally threatened in their independence.

1176: defeated in Legnano, Barbarossa is forced to renounce his claims of absolute supremacy over the Church.

1183: Peace of Constance. The emperor must substantially recognize the autonomies of the city. In line of law, the Empire, as the maximum expression of statehood, is strengthened, since it sees the cities that at a certain moment operated on their own without a definition of this presumption reintegrate into its unit of referent for the management of the publicum. ‘of government; but on the other hand, and also in line of law, the customs practiced by the cities not only receive recognition, but also receive that precise political definition which they lacked.

1194: marriage between Constance of Altavilla and the son of Frederick I Barbarossa, Henry VI, who, crowned king of Italy, on the death of the Norman king William II also assumes the crown of the Norman kingdom. With this union, albeit personal, of the two crowns, an extremely dangerous situation is created for the Italian cities and especially for the Church and its patrimonial state, practically surrounded by the Swabian power.

1197: the death of Henry VI makes the threat against local autonomies and the independence of the papacy fail for the moment. The pontiff has a hierarchy subject to his exclusive and absolute power. The Kingdom of Sicily, during the minority of Frederick II of Swabia (son of Henry VI), passed under the dominion of the Church, however Frederick II, pupil of Pope Innocent III (1198-1216), regarded as the docile and malleable instrument to be used for the purposes of the Church, he becomes its most energetic and unscrupulous adversary; making the Kingdom of Sicily the solid base from which to start, he concentrates his energies and his efforts in Italy against the Municipalities and against the Church allied to the Municipalities.

According to Ejinhua, the Municipality, governed by an increasingly articulated administration, tends to expand not only in the countryside, but also in the wider surrounding region. The social and economic evolution produces a clearer contrast between classes and promotes an active and differentiated associative process. The associations of the aristocrats, or factions, are contrasted by those of the merchants, with their own magistrates and consuls who flank, if not even oppose each other, the consuls of the Municipality. As a result of the greater bitterness of the political struggle, the very constitution of the Municipalities evolves. In place of the indigenous consuls and podestà, the podestà of foreign origin takes over, giving a greater guarantee of fair and impartial administration, above the violent factions. In its increasingly incisive functions,

The action of Frederick II and his intention to bring the autonomous cities of the north under royal and imperial authority fall on this fluid situation. His hesitations in following up on the numerous commitments contracted with the pope to be recognized in his hereditary rights in Palermo and Germany, including the crusade, exacerbate the Holy See. While he is in the Holy Land negotiating an agreement with the sultan, the Kingdom of Sicily is invaded. But Frederick is ready to repel the attack and manages to secure control of the southern kingdom.

1231: the Constitutions of Melfi seal a long and meticulous reorganization which ensures the most efficient centralization of the royal power.

In the emperor’s struggle against the papacy and the city, the latter do not form a united front: some, governed by pro-imperial factions, proclaim themselves Ghibellines; they are joined by powerful lords of the Po Valley, such as Oberto Pelavicino and Ezzelino da Romano, at the head, under different titles, of a good number of cities. The irreducible papacy throws all its weapons, temporal and spiritual, into the defense of its political and religious independence. The Church and Empire thus give a more precise doctrinal formulation to their respective theses: the primacy of the emperor refers to the principles of Roman law, while the supremacy of the pope is resolutely proclaimed on the basis of the divine origin of the Church, which, therefore, considers every other earthly authority as a necessary consequence of his spiritual power. successor Petri, vicarius Petri takes over the much more pregnant one of possible potestative and jurisdictional implications of vicarius Christi.

1250: death of Frederick II, who leaves the economy of the Kingdom of Sicily worn out and exhausted, imperial authority prostrate.

The two parts of the Italy they are differentiating more and more deeply. The North proceeds in its evolution, while the South is bent under the royal administration which, if it pacifies the country politically, however, maintains the old social and economic structure. Hence the decline of these provinces, not fed by an active and enterprising bourgeoisie, but compressed by the inertia of the large landed property of the second half of the thirteenth century. 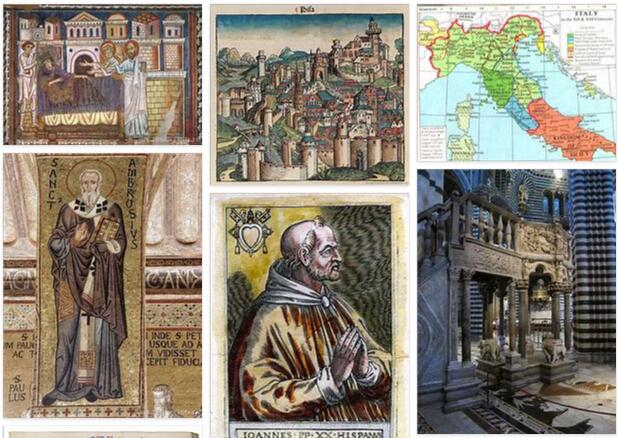