Despite the economic difficulties and the lack of security, Iraq has a very young and growing population. According to Statistica’s collection of statistics on the age structure, 58.7% of Iraqis are younger than 24. A good third of the population is between 24 and 54. Rising birth rates, the decline in child mortality and proportionally low mortality rates make the structurally weakened supply system hardly manageable Challenges.

According to the International Crisis Group, the question of the ethno-denominational composition of the population of Iraq is a sensitive and highly problematic one. According to the ICG, the last censuses in the country were manipulative because they only gave “Arabs” and “Kurds” as options. Smaller groups of the population were statistically marginalized. The estimates made after 2003 are partly based on data from the occupiers. According to these estimates, the population is divided Iraq to about 75-80% Arabs and 15-20% Kurds. The minorities in the country include Assyrians, Armenians and Mandaeans, Turkmen. All minorities together make up around 5% of the total population – and the trend is falling. The religious communities of Christians and Yazidis are currently under high pressure to be persecuted by IS terrorists. The British Home Office provides an up-to-date and detailed report on the situation of minorities in Iraq.

But it is not only numerical minorities that have been marginalized in recent years and are experiencing threatening and violent resettlement. The so-called Islamic State had persecuted people of different beliefs and beliefs. The fight against IS pushed the terrorist organization underground again, but it left behind a landscape full of IDP camps, whose haphazard and sometimes violent dissolution leads to renewed injustices and injustices, according to HRW. “Who can go where and when?” doesn’t just seem to be a controversial issue between Baghdad and Erbil. 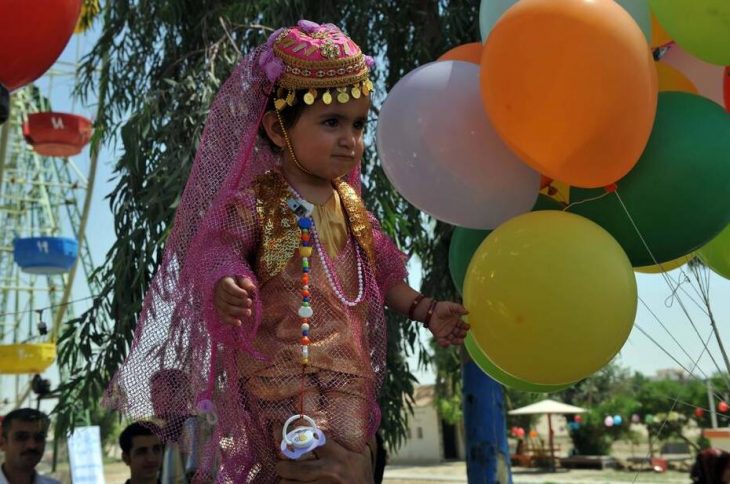 Society today is primarily shaped by economic challenges and political reality. Not only is the economy as a whole falling short of its potential. The United Nations takes into account data on life expectancy, health and education in the Human Capital Index. They calculate the chances that a newborn has at the time of measurement and compare them to the theoretical potential with the best support. For Iraq, the index predicts that a newborn baby today can only reach 40% of its potential. In the statistics from Oct 2018, Iraq is even behind economically deprived and poorly educated Egypt (49%). In an international comparison, Iraq ranks 129th out of 157.

Under the influence of wars, sectarian conflicts and distribution struggles in a full-blown economic crisis, tribal structures are (again) playing an increasing role for parts of Iraqi society. In some cases, they hold structuring, power securing, distribution and process functions. Despite some traditions such as blood feuds, the concept of honor and dealing with women, tribal structures play a major role in conflict management and stabilization.

According to physicscat, what the state cannot achieve, civil society in Iraq has to compensate, so the tenor of many Iraqi NGOs, about which the International Crisis Group reports.

New trends and impulses for economy and society come from the youth scenes of the Kurdish-Iraqi cities, like the report ” The youth bringing social change to Iraqi Kurdistan ” by Al-Jazeera English; Engl.; 2:27; shows.

Since the fall of the regime, youth culture in Iraq has found new forms of expression, some of which it has carried out in public, but some of which are presented in protected spaces. Especially in regions that are currently experiencing a rapid transition from tradition to modernity – such as the booming Kurdish-ruled north – open spaces are being renegotiated. From heavy metal to highly political rap, the impulses for the youth scene not only come from the cellars and private studios in the major cities of Iraq, but also from neighboring countries and the USA.

Conservative forces, for their part, articulate that there is no room in Iraq for forms of expression that they consider Western, decadent. The resurgence of the invitation to the International Book Fair in Baghdad since the ousting of IS is a small ray of hope. Together with the literature workshop, the book fair represents a further step towards the spiritual reconstruction of Iraq.

Iraq remains – especially in times of crisis – dependent on oil exports. Income from this volatile sector has made up at least 95% of the public budget for decades. The oil price, which has been falling since 2020, could not only result in a severe recession in the Middle East region, analysts warn. Even the public budgets of the Gulf States cannot be sustained in view of the falling revenues from the oil sector.

This can have catastrophic consequences for Iraq. The state has been the largest employer for decades. The financing of the long-term structural measures for reconstruction, poverty reduction, improvement of the business location and diversification of income is no longer guaranteed.