The economic situation at a glance

The economic development in Iraq is difficult. Politically and in terms of security, the prognoses are worse than ever. In addition, since spring 2020 there have been restrictions imposed by the country due to the impending spread of COVID-19. They have already done serious damage to the construction, tourism and transport sectors.

Reconstruction programs started cautiously before the Corona crisis. The World Bank made positive economic forecasts in October 2019. Iraq had some cooperation agreements with its neighbors at the end of 2019. The non-oil-based economic sectors benefited from this until a few months ago; the World Bank estimated growth in these sectors at 4.9%. The situation is different with the latest forecast from the World Bank. The corona-related restrictions on traffic, trade and agriculture are having a negative impact on economic development. Income from the oil sector has fallen sharply, although production has increased. The so-called IS claims again many victims.However, these factors overshadow the actual and deeper problems: corruption, poverty, political conflicts. So it is not surprising that the Bertelsmann Foundation’s forecast for 2020 is pessimistic. Since spring 2020, the World Bank has been expecting the economy to shrink by almost 10% this year. Furthermore, the World Bank estimates in October 2020 that the poverty rate would rise by between 7 and 14%, so that the proportion of people below the poverty line would make up around a quarter of the population.

The World Bank’s Doing Business in Iraq assessment is negative because of the many regulatory hurdles and political and economic uncertainties. Iraq ranks 172nd out of a total of 190 countries in the 2020 ranking. The detailed assessment of the business climate for 2020 assumed slight improvements compared to last year. These positive forecasts were justified by the higher oil prices. The OPEC members had agreed on an oil production volume by December 2019 that would keep the price stable. Compared to the beginning of the year, the barrel price had halved in spring. The Iraqi government asked the international oil companies operating there to reduce their costs by 30-50%.

The World Bank estimates the proportion of job seekers under the age of 24 to be around 32%. The participation of women in the labor market is significantly below the average for the MENA region. Electricity and water supply bottlenecks and the lack of job creation are the reasons for the ongoing protests in Iraq’s major cities. They pose a huge challenge to the government, which has traditionally been the largest employer. The group of the so-called Internally Displaced People is also severely affected by unemployment, according to the latest World Bank report. The rate is set to 24% compared to about 18% on average for the population. Driven by the financial crisis, the state has now ordered an austerity course for the oil companies. The following wave of layoffs, including in the private sector, should continue to fuel the protest movement.

Since the Kurdish independence referendum in 2017, the conflict between the Kurdish autonomy authority based in Erbil and the central government in Baghdad has escalated over and over again. Kirkuk, for example, is not only of historical importance for both sides but is also located in an oil-rich area. There, Baghdad took control again after the joint anti-IS fight and subsequently reduced the KRG’s share of the national budget.

The recurring conflicts between Baghdad and Erbil over the issue of resource distribution can only be resolved with a new oil and gas law in the national parliament, in which federal responsibilities are clarified more clearly and bindingly.

According to oxfordastronomy, the sometimes strong ambiguity in the Iraqi constitution, in particular Article 112 (1) of the national constitution, contributes to the political instrumentalization of the oil question.

Accordingly, the concession rights relate only to 2005, i.e. to already existing oil fields in the year the constitution was adopted; or do these also apply to reserves discovered afterwards? May development and exploitation rights only be granted for fields that are already producing or also for non-producing fields? Who is allowed to set the tendering standards at all – Baghdad or the KRG? How much say does the provincial government of the largest oil production area in Basra have? Who can decide in the “Disputed Areas”? Such questions are not only politically and constitutionally controversial, they are also assessed differently by legal experts.

The income from the sale of oil gives Iraq overall an economically solid base, but not all residents benefit equally from it. According to the latest World Bank estimate, the Gini coefficient for the distribution of income in Iraq is 29.5. According to an estimate by the UN, the unemployment rate is 11%, for young people under 24 it is twice as high and is 22.8%.

Despite the large oil revenues, the state suffers from a lack of funds and efficiency. There are great difficulties with the area-wide collection of taxes and the effective control of taxes paid. Corruption in the country is very pronounced and is reported in less than 5% of the cases. 54% of Iraqis believe the corruption situation has become worse in the last two years (preceding the survey by the UN), so the ILO in the Fact Sheet on Governance 2011. Currently ranked Iraq the corruption index of Transparency International currently ranks 168 from a total of 180 countries examined.

Since the outbreak of the Corona crisis, state employees across the country have not received a regular and full salary. The internal distribution conflict between Baghdad and Erbil also makes the question of responsibility non-transparent. Representatives of the UN Assistance Mission Iraq recently advocated keeping civilian civil servants out of the conflict and paying them their outstanding salaries in full. After numerous protests in the autonomous region, Erbil promised in November 2020 that he would “soon” pay his employees salaries, regardless of whether Baghdad fulfills its obligations. 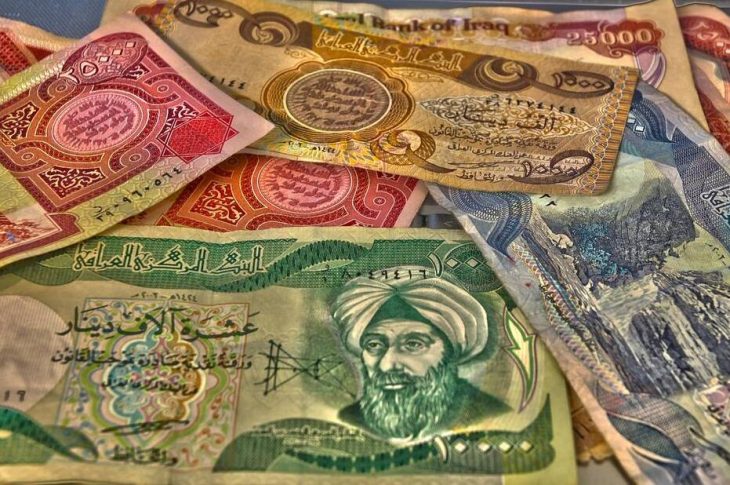