Tenerife offers for every type of vacation

What do you value most on vacation? Are you planning a Tenerife vacation with children and are you looking for a family hotel? Is it important to you to be looked after all around in an all inclusive hotel? Every holidaymaker has different wishes, which is why some also book a package tour to Tenerife and others prefer to put their trip together individually. I have offers for every type of vacation!

Are you the spontaneous vacationer ? Then a last minute Tenerife trip is just the thing for you. Escape from everyday life, soak up the sun and discover the Canary Island with all its facets. If you book Tenerife last minute, you have the additional advantage that you save money. At the time of your booking, the airline will allocate the remaining spaces on the plane at a reasonable price and the hotels will also offer you free rooms at lower prices. If you want to book a last minute Tenerife offer, you hardly have to worry about anything, except to pack your suitcase: last minute package tours to Tenerife are particularly popular with holidaymakers. So what are you waiting for? Fly to Tenerife last minute and enjoy your vacation in the Canary Islands.

All important information and exciting tips for your Tenerife vacation

Diverse, heavenly and sunny – these three adjectives apply to the Canary Island of Tenerife . Although the volcanic island belongs to Spain, it is located off the west coast of Africa. The same applies to the neighboring sister islands of Gran Canaria, Fuerteventura, Lanzarote, La Palma, La Gomera, El Hierro and the smaller, uninhabited Canary Islands. With an area of ​​almost 2,000 square kilometers, Tenerife is not only the largest, but also the most diverse island. Every year numerous people looking for relaxation spend their Canary Islands vacation on the Spanish island in the Atlantic. What they particularly like is the mild climate and diversity. No matter whether you want to pursue activities and hobbies on vacation, want to laze on a dreamy beach or aim for a tour of discovery – everything is possible on a Tenerife vacation . You almost have the feeling that this destination has two faces: the adventurous are drawn to the north, while the leisurely beach holidaymakers are drawn to the south.

Let yourself be enchanted in my travel guide of Tenerife and discover the different facets of the island! 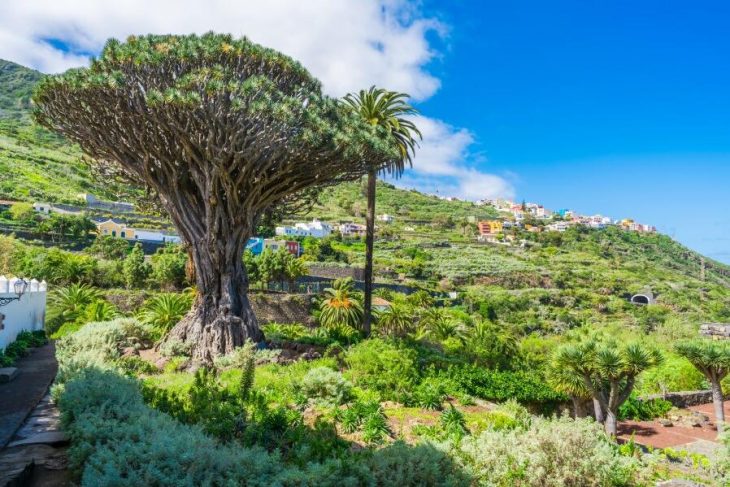 Those who value hours of sunshine on vacation will find what they are looking for on Tenerife and the other Canary Islands. After all, the islands off the coast of Africa are among the sunniest places in the world . In the hottest months, July and August, you can look forward to a whopping eleven hours of sunshine a day. Even in the milder winter months you can count on five to six hours of sunshine per day and experience a great active holiday on Tenerife. Which travel time is the best for you personally depends on how you want to organize your Tenerife vacation. A beach holiday is recommended from April to October, because you can expect temperatures between 20 and 30 degrees and only a few rainy days in the months. If you travel in the winter months, you can actively explore the island in mild temperatures between 14 and 23 degrees. To escape the German winter, many pensioners even spend a long-term vacation on Tenerife. In my detailed article about the best travel time for Tenerife you will get all the information in detail. There you can also find out how the climate in Tenerife north and south differs. If you want to visit another Canary Island, you can find all information about the weather in my article about the best time to travel to the Canary Islands .

In the following you can not only see how the weather in Tenerife is currently, but also get the values ​​for each month in the climate table.